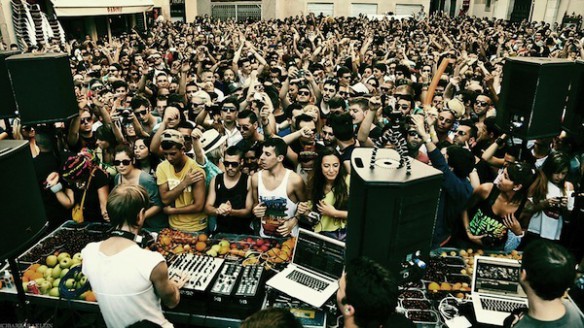 via: http://m-nus.com/ by: Barbara Klein

Through a carefully coordinated brand promotion, Richie Hawtin’s M-nus label has attained a level of worship envied by most in electronic music circles. As well as being buoyed by Hawtin’s long, esteemed career as a performing DJ, mostly under the alias Plastikman, M-nus has forged its own unique brand under Hawtin’s stewardship, to become one of the eminent labels/collectives operating in the EDM industry today.

M-nus was established in 1998 following in the footsteps of Hawtin’s former label, Plus 8. Since then it has grown from strength to strength, expanding from Canada to Berlin in a fortuitous European move which has expanded the label’s cultural base and its range of influences. By combining the talents of DJs with international scope, such as Barem (Argentina), Matthew Dear/FALSE (USA) Marc Houle (Canada) and German talents such as Loco Dice, M-nus have established an expansive appeal, welcoming styles from all over the globe to partake in this revolutionary musical project.

An examination of M-nus’s history of promotion has shown the importance of a unified aesthetic, rendering its website and artwork in a recognisable minimalist sleek grey and black template and an eye catching attention to empty space, epitomised by the label’s singe hyphen logo, which marks it out as modern, bold and refined.

Central to M-nus’s artistic message is the presentation of a close-knit community of creative DJs combining those from underground circles alongside big name acts like Hawtin, Matador and Loco Dice. This diversity is accommodated for in releases under the ‘minimum to MAXIMUM’ theme, with the ‘min’ tracks featuring a classic underground sound, while the ‘MAX’ releases are geared towards a big room techno style. In an era of sub-divisions among many music labels who prefer to group similarly minded artists together on smaller releases, M-nus is creating a boldly unified approach to problems of categorisation in embracing differences, opting to focus instead on the shared commitment to creativity under an integrated musical brand. 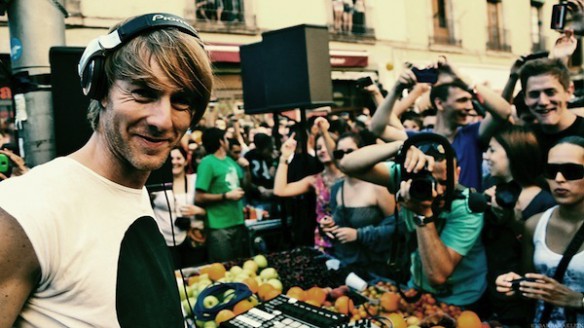 via: http://m-nus.com/ by: Barbara Klein

Like many electronic labels M-nus promotes its brand through merchandise available on its site. On offer you will find a broad range of t-shirt styles emblazoned with the label’s club night ENTER’s characteristic single dot alongside a few more curious items such as M-nus brand jewellery and even toothbrushes. Interestingly M-nus have also moved into selling hardware technology, presenting a modest selection of MIDI instruments, effects and mixers especially constructed for sale through their website. The existence of such merchandise underlines M-nus’s desire to appeal to a body of more hardcore music fans and producers. In the same way, Hawtin has recently embarked on a college lecture tour in North America discussing and promoting ‘the deeper side of electronic music’ alongside Loco Dice, Carl Craig and Seth Troxler, serving to cement Hawtin and M-nus as guardians of intelligent dance music culture. It is this carefully managed rendering of artistic legitimacy that allows M-nus to permeate dance music consciousness and provide essential favourable publicity for the label.

Another vital component of M-nus’s brand awareness is their social media handling. Through Facebook and Twitter, podcasts, mixes and promotional videos for upcoming concerts are heavily promoted, with their small army of productive DJs regularly issuing mixes under the ‘minMax Compilation’ banner. Hawtin has again expanded beyond convention in social media terms in pioneering a new program called ‘TwitterDJ’, which updates sets on 30 second intervals, giving the viewer a track name and a link to download that song if available. As part of Twitter DJ it’s possible to view a map of all the connected DJs in the world currently performing as well as a real time read out of the track choices. On top of this Hawtin has also worked with Native Instruments in promoting the Traktor DJ App for the iPad, allowing one to mix tracks from devices on the go. The label boss proves himself to be fearless in embracing technology, anchoring his label and brand behind a new movement of connectivity in the electronic music world.

In addition to this Hawtin has also been heavily touring around the globe promoting the widely successful ENTER night. Through a social media campaign, providing high quality DJs and an impressive array of visual and staging effects, ENTER has established the label as a key player in all major dance music cities around the globe, lighting up Miami, Ibiza, Berlin, New York and others on a regular basis.

This is something which can be tracked as far back as Hawtin’s Plus 8 days, in which he concocted the ‘Plus 8 Classics Tour’ in 2000, playing in over forty shows in twenty countries, drawing in online fans and cutting down conventional barriers by posting an online diary each day and integrating this with his Plastikprodukts online membership club.

The success of M-nus’s marketing campaign lies in its subtlety in alternating promotion tactics to achieve a maximum appeal from music fans. In this way, M-nus push for a level of online saturation unthinkable by many labels their size in maintaining a heavy social media presence and plugging a vast range of merchandise while limiting releases to a minimum in order to maintain potent hype surrounding releases. Through an intriguing interplay of utilising cutting edge technology, some old school passion in self-promotion, an impressive musical catalogue and above all, a rigorous attention to a coherent aesthetic which ties these together, Hawtin and M-nus have managed to carve out a remarkably visible brand among many similar types in order to secure its position at the forefront of electronic music today.