April 20th witnessed the largest Record Store Day ever, seeing shops swell for a Saturday of activities in which collectors came together to share in the joy of music, and its multiform complimentary cultures.

A grass roots movement conceived by record store employee Chris Brown, Record Store Day has gained an international following, expanding outside of its official celebration in the US to encompass stores around the world for one special April day each year. In recent years celebrity ambassadors have vehemently assumed the role of publicity stars in curating the festival, with Jack White resetting the bar in terms of drawing attention to the event through an internet video campaign this year.

RSD has injected attention, investment and sales into a flagging business; ushering in vinyl’s return as a viable format for new music artists to release music. What was once an anachronistic indulgence of older generations has been gleefully seized by a new body of 18-24 year olds, bringing a passionate appreciation which has served to simultaneously rouse older fans back into activity.

A format which has long been treasured by EDM artists, the widespread resurgence in vinyl has been attributed to indie-folk artists who have sought to market their work in this mode, often combining records with access to MP3 tracks in order to appeal to younger fans and safeguard its relevance.

What’s interesting is that those currently interested in vinyl, both young and old, are also living in a world in which the digital revolution has become firmly ingrained in all aspects of their lives. As a result we witness a paradoxical situation in which this analogue revolution is being negotiated through the internet realm. In a telling article, Maclife.com, an online site devoted to Apple-themed digital products, has published its definitive ’8 Apps for Record Store Day Enthusiasts’ list, which provides a host of varied, inventive, technological ways to enhance your RSD experience.

The first mentioned in the list is the standard official RSD app, which quite plainly functions to show you where the nearest competing record store is situated. The subsequent entries provide some interesting reading concerning the ways in which past trends are being mined by cutting edge technology under the banner of enhancing the accessibility and immediacy of consumption. If you find yourself enchanted by a song that’s playing over record store speakers but don’t know the title, SoundHound, can provide an on the spot track ID while you navigate the crates. If you’re flicking through records and are struck by how prized everything feels in your hands, but you’re not sure which one is really worth your well-earned bucks, fear not, iCrates is an app that allows you to scan the barcode of any record and see how rare it is. Similarly, Popsike provides an instant read out of a history of price fluctuations for records going back to 2005, providing the buyer with a valuable vantage point in determining whether or not it’s worth the buy based on historical analysis. The Vinyl District app allows you to interact (over the web) with fellow vinyl enthusiasts and Tunage can even compare your iTunes libraries with fellow subscribers in nearby locations, pointing you in the direction of people who share similar tastes. Perhaps the most curious app in the list is a thing called Vinyl Rap which inputs pops and clicks over your digital sounds to give you the sense that you’re listening to a true vinyl record. One reviewer claims it’s ‘hands down, the best turntable simulator I’ve ever used on the iPad’. We have now reached a point where, through the deliverance of technology, we can obtain new levels of authenticity imported into our nostalgia trips, a deeper immersion into an idealised and immediately preferable past.

The existence of these apps is symptomatic of our free music culture. Though events like RSD are rebelling against the encroachment of streaming and illegal downloading, the younger generation’s conception of music consumption is so tied to the mechanics of this liberated means of digesting art, that our attempt to resuscitate the glorious past has become inherently tied to our developing fear-driven desire to only purchase a ‘sure thing’. Through our familiarisation with colossal bodies of information available updated in real time now functioning as a vital component of the shopping experience, it begins to seem ignorant not to use this technological vantage point in achieving a guaranteed successful purchase. Part of the beauty of records lay in the mystery of often not knowing what you were getting. In the age of free music, we’ve come to expect to not waste our money when it is spent; we’re finding inventive ways of not gambling on music. In the same way that we desire bespoke friends through social media sites, we seek guaranteed rareness for our records, guaranteed worth, assurances of its status as a collectible.

Isn’t the whole point of RSD to encourage human interaction, to have at least one day of the year where people are comfortable stumbling across records and discussing tastes, even asking an employee what song is playing if it piques their interest? 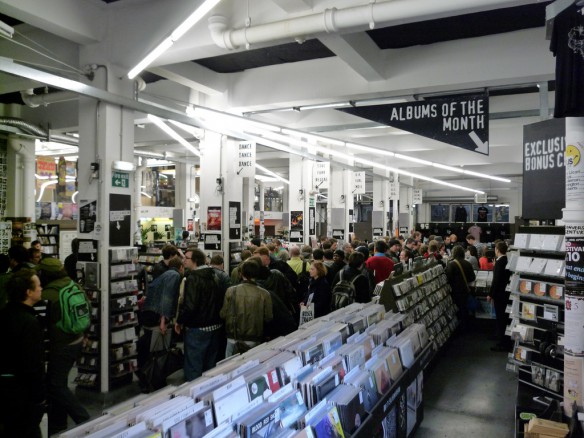 RSD helps to attract music fans who would ordinarily never bother leaving their Spotify/torrent empowered desks to go out there and find new music. Limited edition records have long been an almighty boon for vigilant fans. 2013 saw the announcement of a plethora of limited edition releases, providing a mouth-watering injection of interesting collectibles into the market over a very concentrated period of time. It’s becoming more and more difficult not to dwell on the disconcertingly gimmicky nature of these releases. Among this year’s 350 plus limited releases we see Canadian melodic baroque veteran Feist teaming up with metal heavyweights Mastodon to create ‘Feistodon’, The Flaming Lips have apparently released a record which mixes the band members’ blood in with the vinyl (these can be picked up for $2,500 a piece), GZA’s Liquid Swords album has seen an extremely limited rereleased as a convertible chess set, complete with little wooden pieces, other less eccentric artists have simply released specially coloured editions, with almost every imaginable shade of the wheel on offer for one day only.

Limited edition releases are prized as such special items because they are needles in haystacks involving a keen eye or very often pure chance on behalf of the lucky music fan. When limited, gimmicky releases provide the bulk of material being released it descends to the point of farce.

RDS owners proudly confirmed that 8 out of the 10 top selling albums from last week were RSD exclusives. We’re finding ourselves in a situation where people are queuing up before record stores open, on one day of the year, driven by the desire to get their hands on the most limited of limited of pieces.

A retrospective article by Spin magazine provides a platform for people to upload photos of their newly purchased items, emblazoned with the title ‘RSD 2013 Swag: Show us what you got!’. Below the title is an amorphous body of images of people with their prized records, each with a hyperlink to their twitter handles. While the internet hype around RSD is well-intentioned, the publicity it provides is outlining the day out as a consumer event; a chance to brag about how collectible one’s purchases are, all filtered through the hyperreal space of social media platforms. 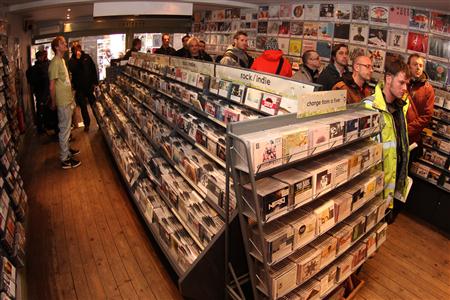 Hands off my collectibles

Building a market on collectibles marks it out as a trend, a fad, and fads pass. While the estimated average 2013 RSD customer spend of around £45 is an impressive feat, it points to a consumer driven climate in which sales are spiking for one day a year due to a fear of being left behind in coolness terms. ‘Exclusivity’ pervades the noble grassroots nature of concept. As we become more attuned to the possible rarity of the items on offer (via technological means, or the frenzied atmosphere of fellow busied consumers), our desire to seize the opportunity to own that item increases as a sort of defence mechanism in which we seek to protect and validate our existence as a valuable component of this day of high intensity mass collection. Essentially, it’s taking a beautiful aspect of record store culture, the limited release, and making it the vanguard of the revival of the medium.

As it stands, vinyl gets its one day of the year in the spotlight. The extent to which this is actually forging a sustained base of new vinyl buyers is debatable. While the RSD organisers are going to lengths to ensure online superstores don’t eat up too much of the profits, the reality is that sites like eBay, eil.com and Hard to Find Records provide incomparable ease in terms of browsing and purchasing rare vinyls; sites which, for the rest of the year, are passionately utilised by many record collectors.

When so much emphasis is put on the collectible nature of the products, the actual discussion of the music withers in the face of it. It’s a situation which seems to be, perhaps unintentionally, summed up best by RSD co-founder Michael Kurtz who concludes, ‘they love that it’s limited, it’s a piece of art’. In our fetishisation of the incomparable feeling of holding an actual LP in our hands, we are overemphasising the importance of the physical properties of the record, eroding the eminence of musical content as the primary reason for purchasing a record.

While a lot of the music on these limited RSD releases sound extremely interesting – such as Nicolas Jaar’s remix of Brian Eno/Grizzly Bear, Evian Christ’s 20 minute experimental piece, Jamie xx’s Edit’s ’12 - much of the promotion work all to readily eschews mentioning the musical project in favour of plugging the aspects of design.

It is this potent mix of alarming gimmickry and the pervasiveness of ‘internet identity’ as a consideration for collectors that seems to cast an unsettling, paradoxical mask over a what is at root a very noble endeavour.

The jury’s out on whether RSD will be a legitimate music revolution, or just a blip on the art form’s descent into a wholly electronic format. Whatever the success of such an event in preserving the days of physical releases, the means of promotion and dissemination seem unavoidably negotiated by the intangible tug and pull of happenings in the digital world.